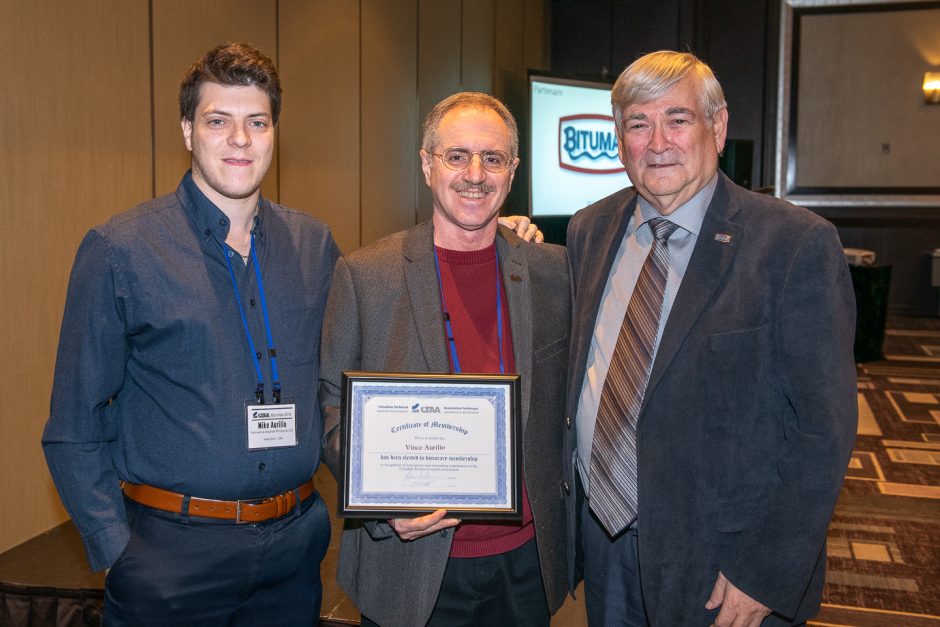 The Canadian Technical Asphalt Association welcomes the newest inductee as an honorary member at the Robert Noble Awards Luncheon.

Vince was introduced to the attendees by his son, member Mike Aurilio:

For those of you who know Vince, you’ll know that he’s had a long career in the industry and been a contributor to CTAA for close to 30 years. He has published over 20 technical papers, served on the CTAA board as President and presented many times at CUPGA workshops.

Perhaps more important than those formal contributions, is how open he’s been to helping people by sharing his knowledge and experience and discussing new ideas. Vince has always been able to make the discussions fun as well which makes learning so much easier for the people who work with him. What you might not know is how committed he has been to helping Ontario adopt new technologies over the years, such as Superpave, SMA, and warm mix asphalt. He has always been and still tries to be at the forefront of asphalt technology.

For this work and the work he will do in the future to promote CTAA and good asphalt technology, this honor is very well deserved.

In the nomination, members identified that Vince has been a very active member of the Canadian asphalt industry’s technical community for close to 30 years, having worked for industry, agency, and consultants at various points in time. Vince served as the Technical Director of the Ontario Hot Mix Producers Association (jointly with the Asphalt Institute as the Canadian Regional Field Engineer) from 1999-2005. In this role, Vince was directly involved with the implementation of Superpave and Stone Mastic Asphalts (SMA) in Ontario. Vince also played an important role in educating members of the asphalt industry across North America teaching as many as 20-30 seminars per year. He also maintains an active involvement in the instruction of pavement design and preservation techniques in Ontario. Vince most recently served as the Executive Director of the Ontario Asphalt Pavement Council where he works directly with industry stakeholders to ensure higher quality pavements become a reality.

In addition to his involvement in CTAA, Vince has also been an active participant in other organizations such as the Transportation Association of Canada (TAC), the Association of Asphalt Paving Technologists (AAPT) and the Transportation Research Board (TRB). Vince also participates on the Centre for Pavement and Transportation Technology (CPATT) Board of Advisors. This role and his commitment to Superpave, SMA, and other new technologies underscore his commitment to research and innovation in the field of asphalt technology in Canada. Vince has always highlighted the importance of CTAA alongside these organizations and sought to promote CTAA whenever possible.